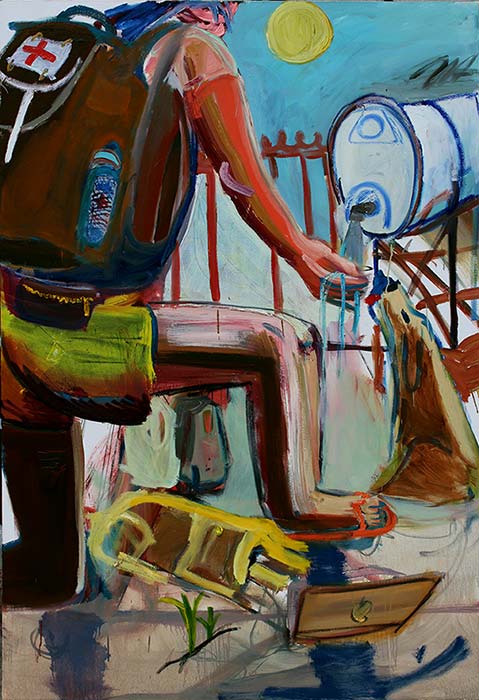 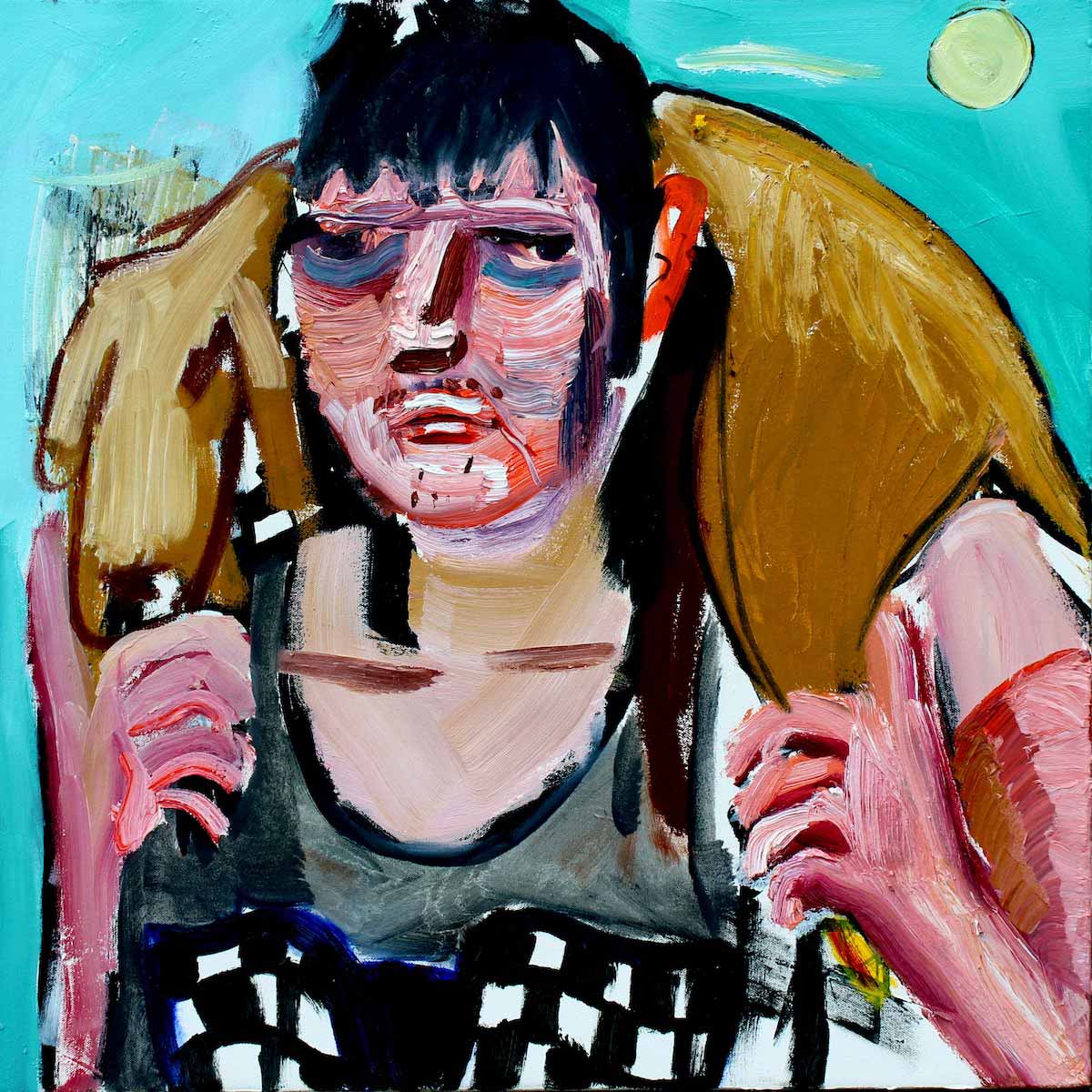 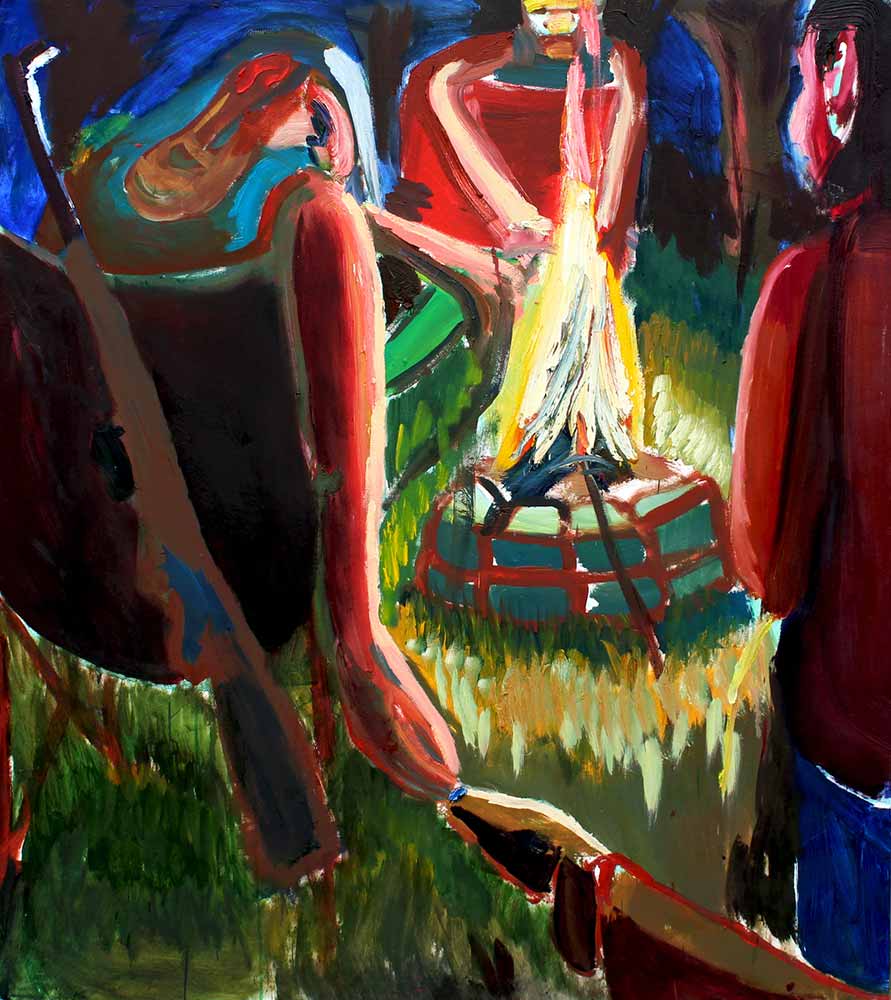 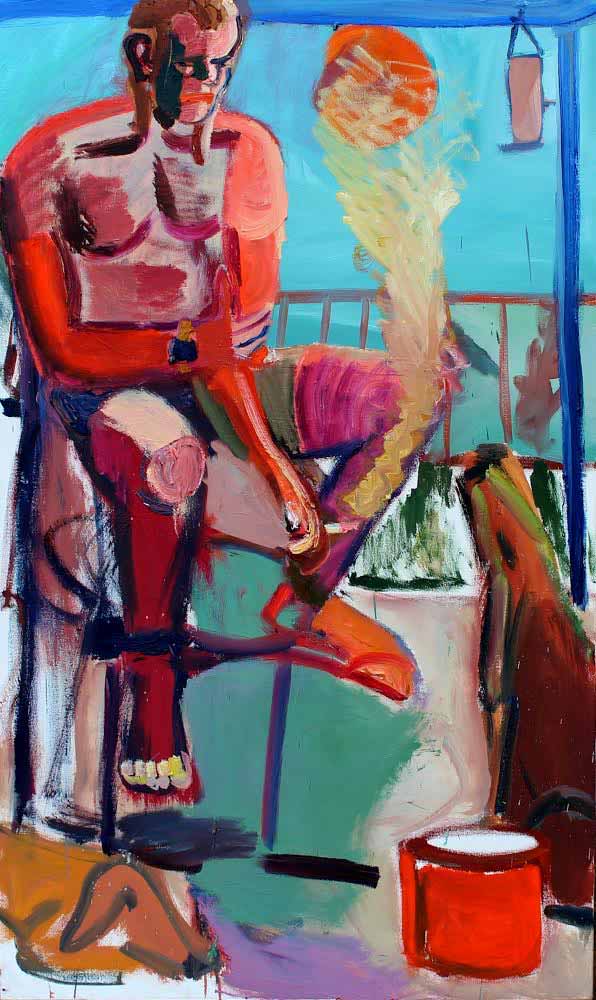 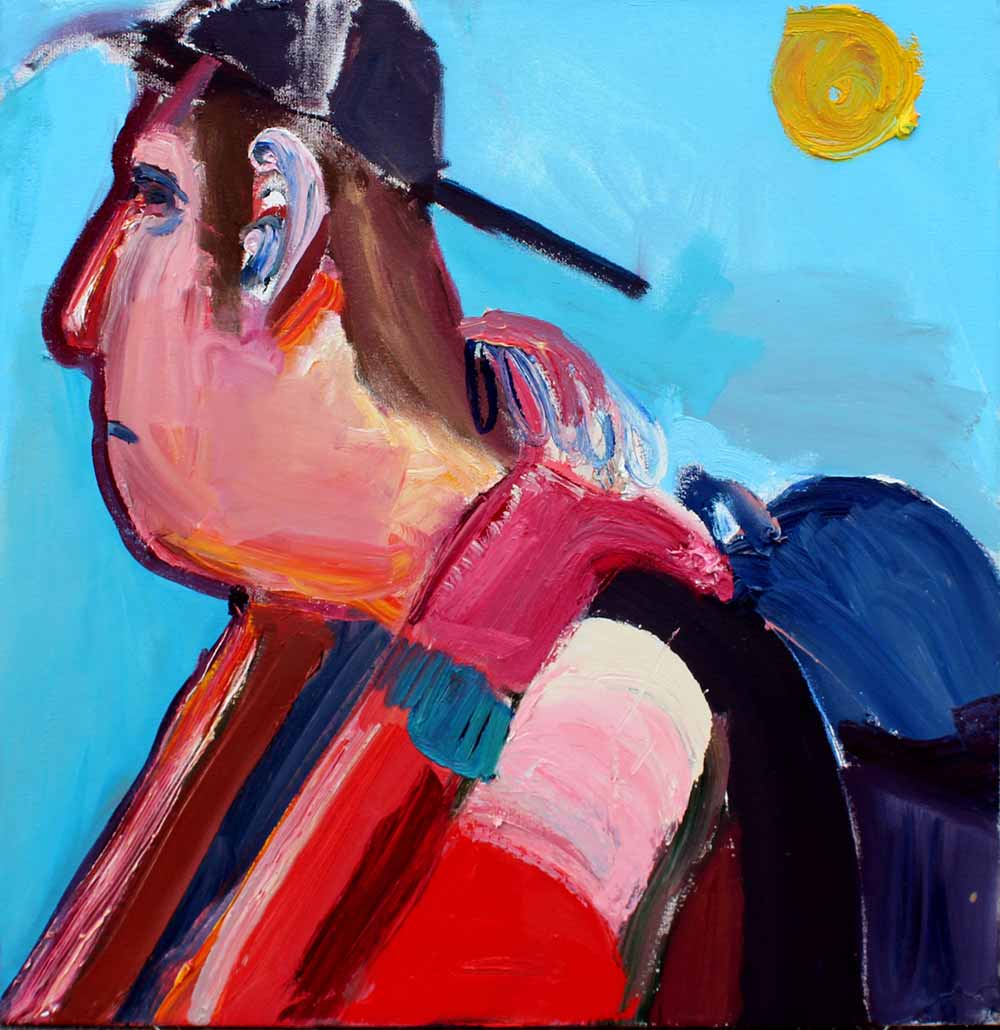 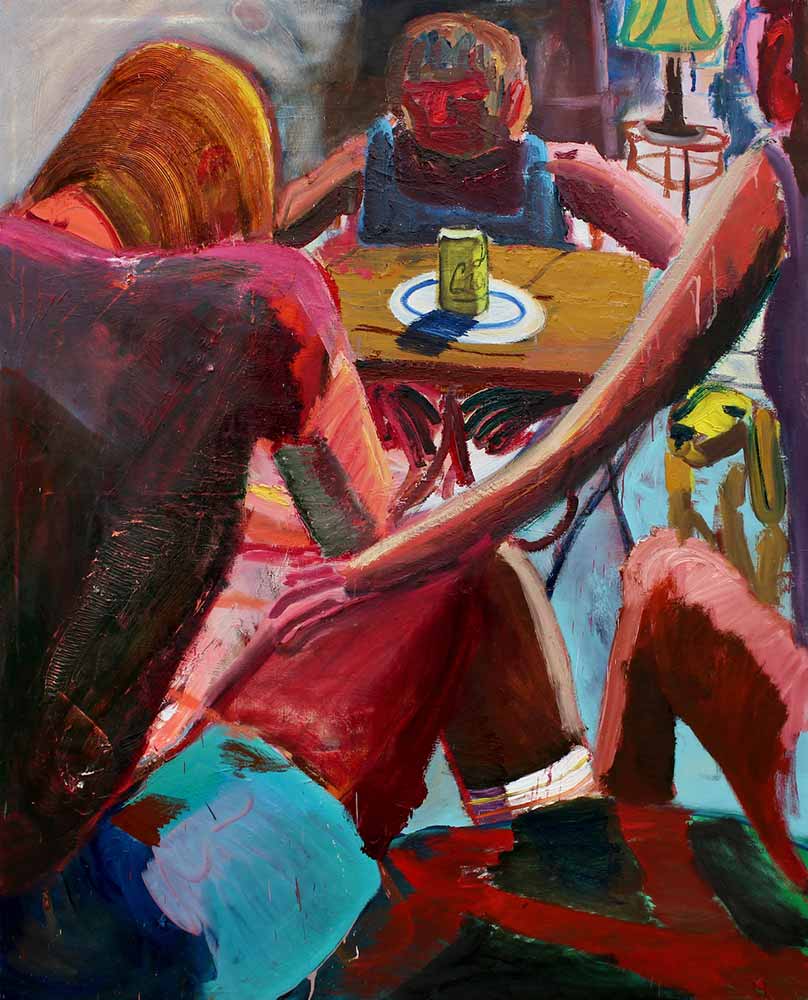 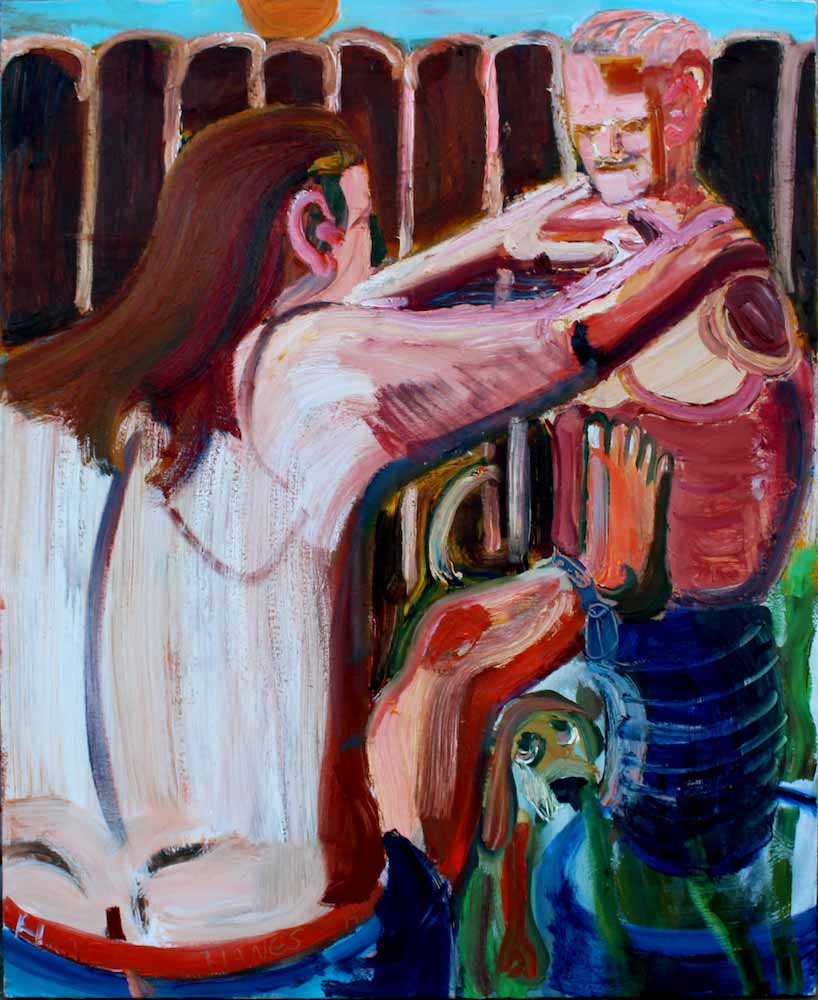 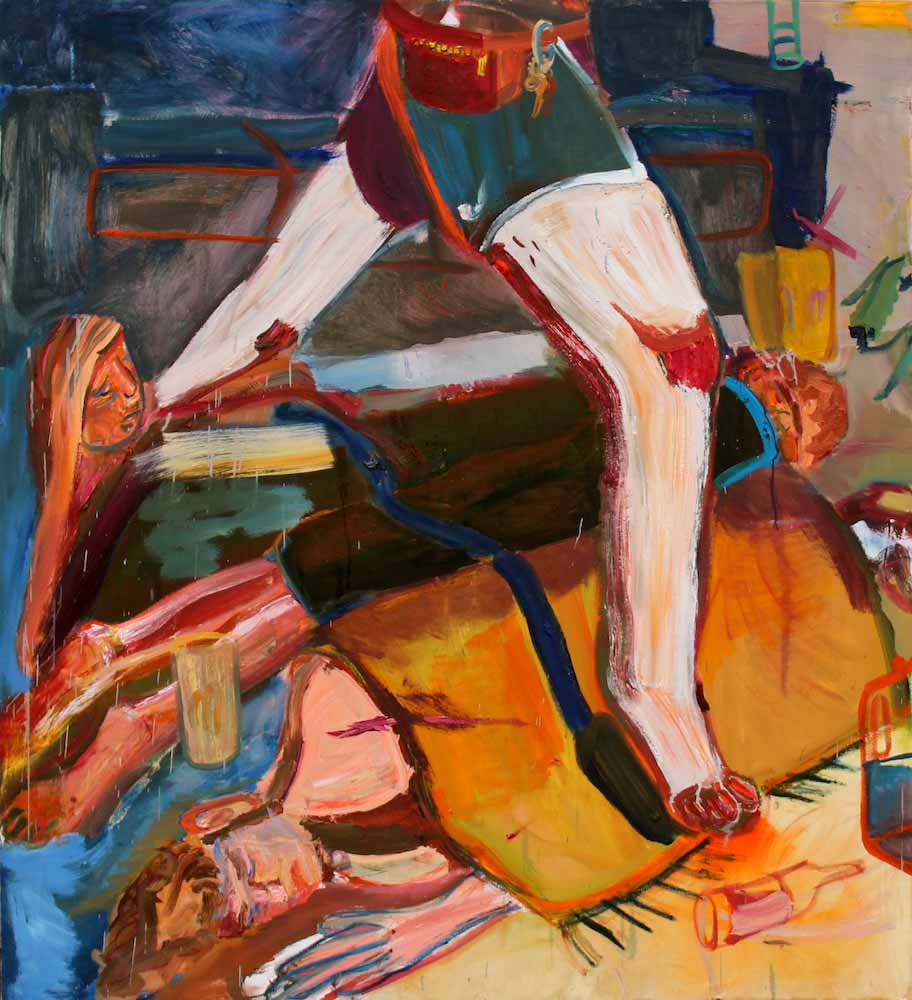 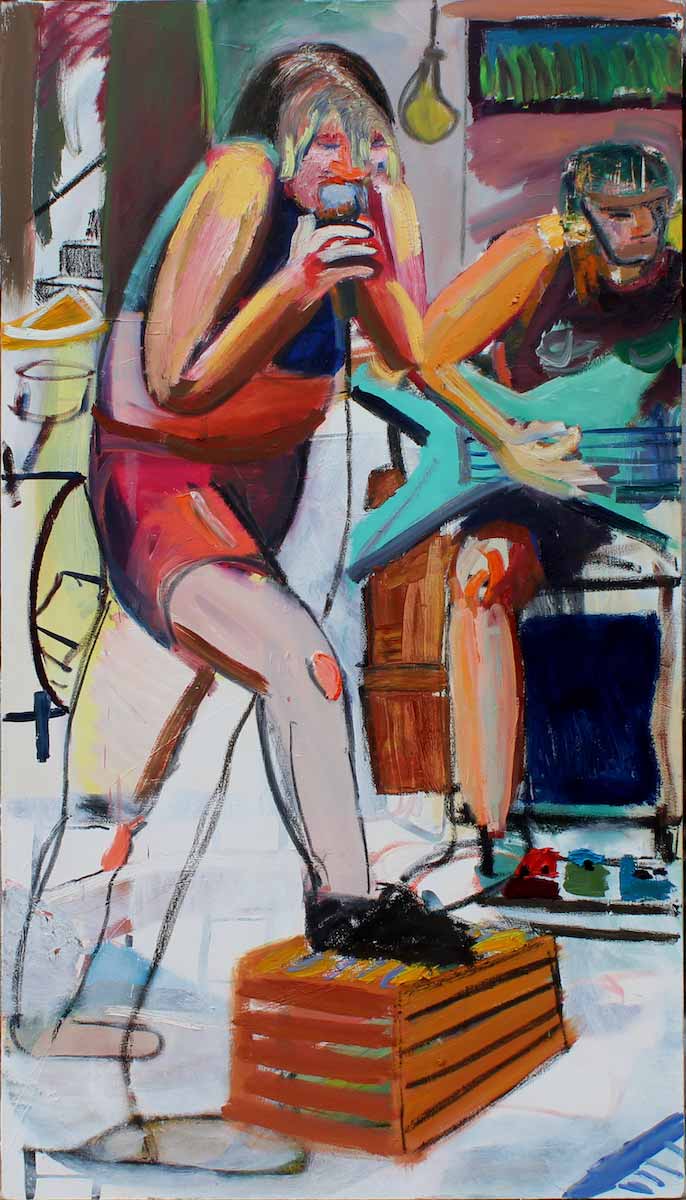 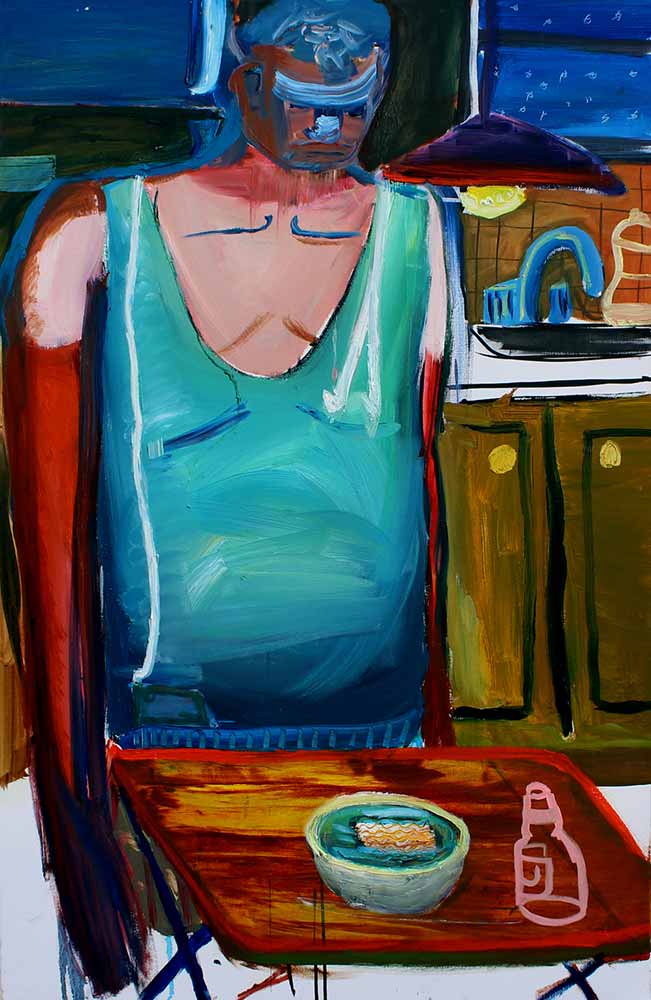 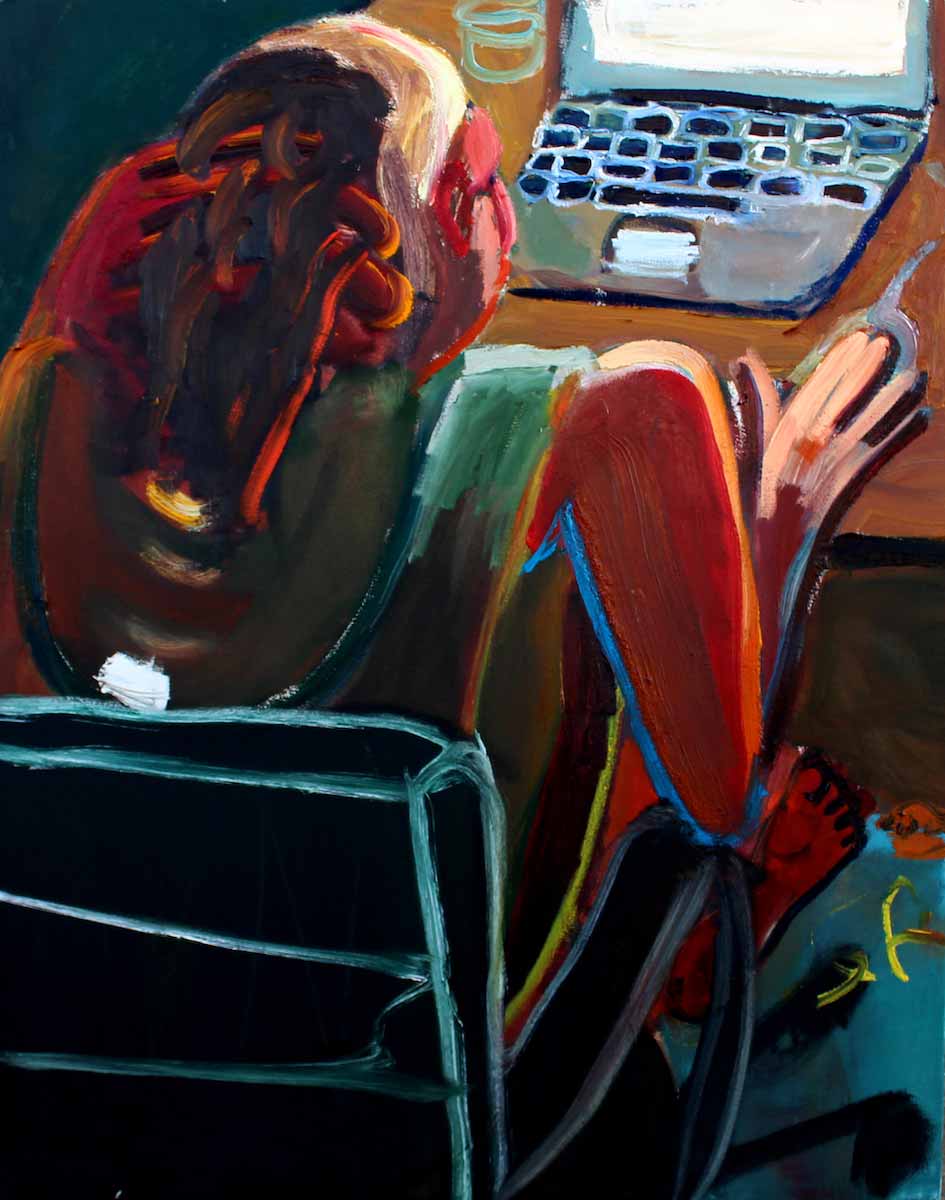 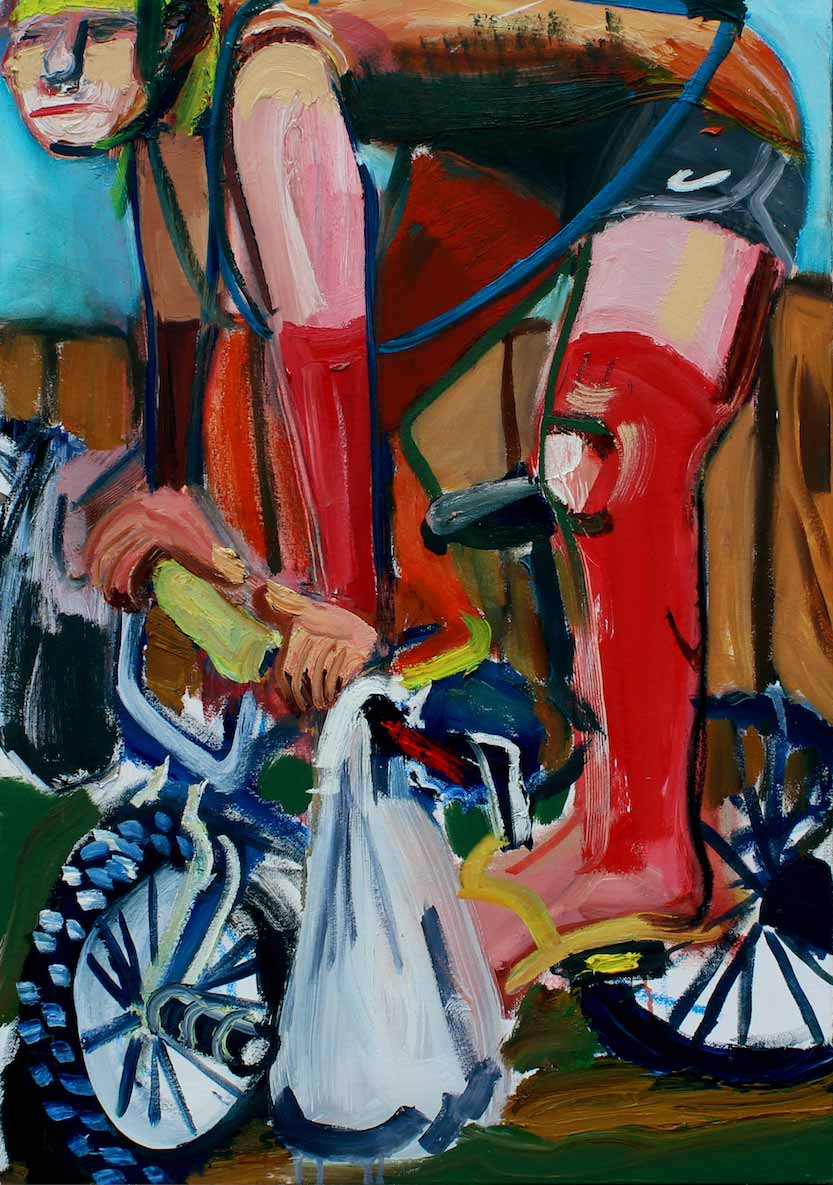 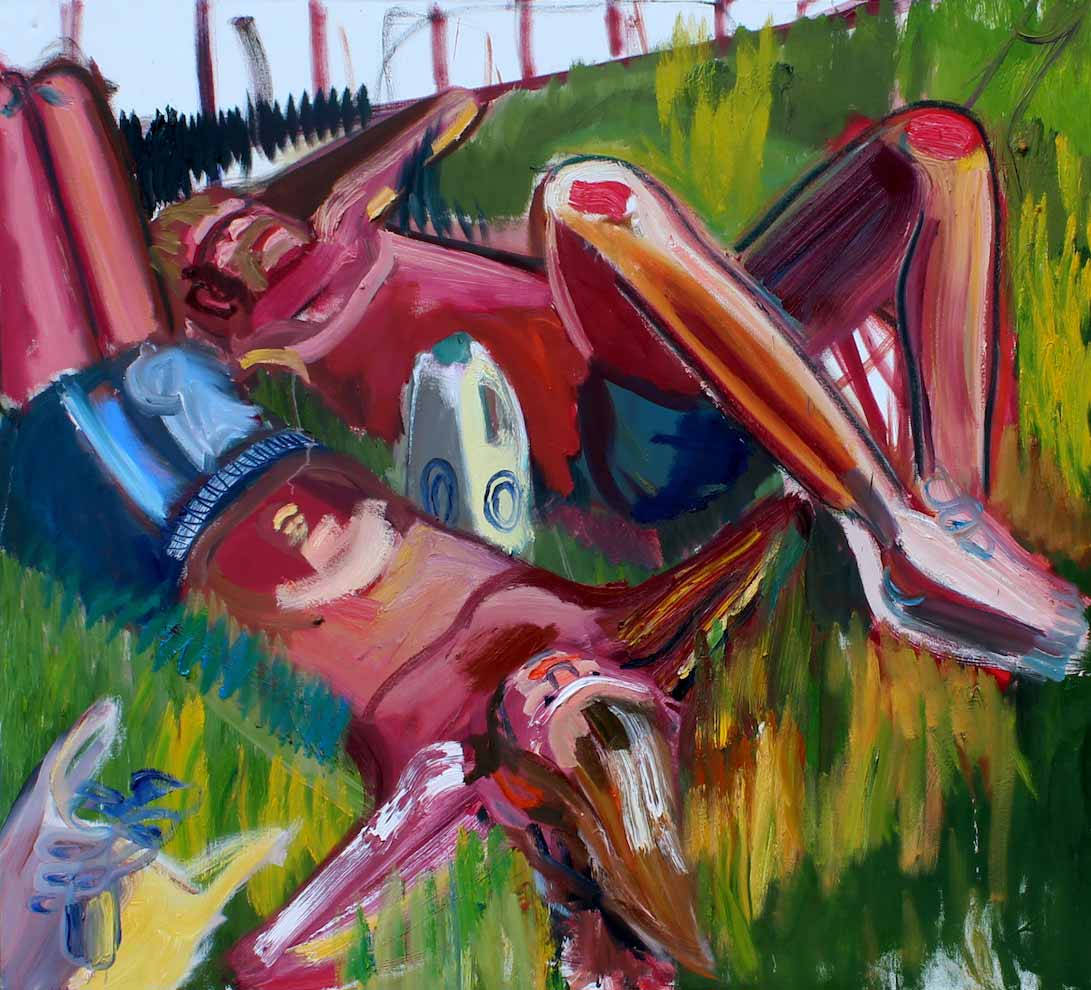 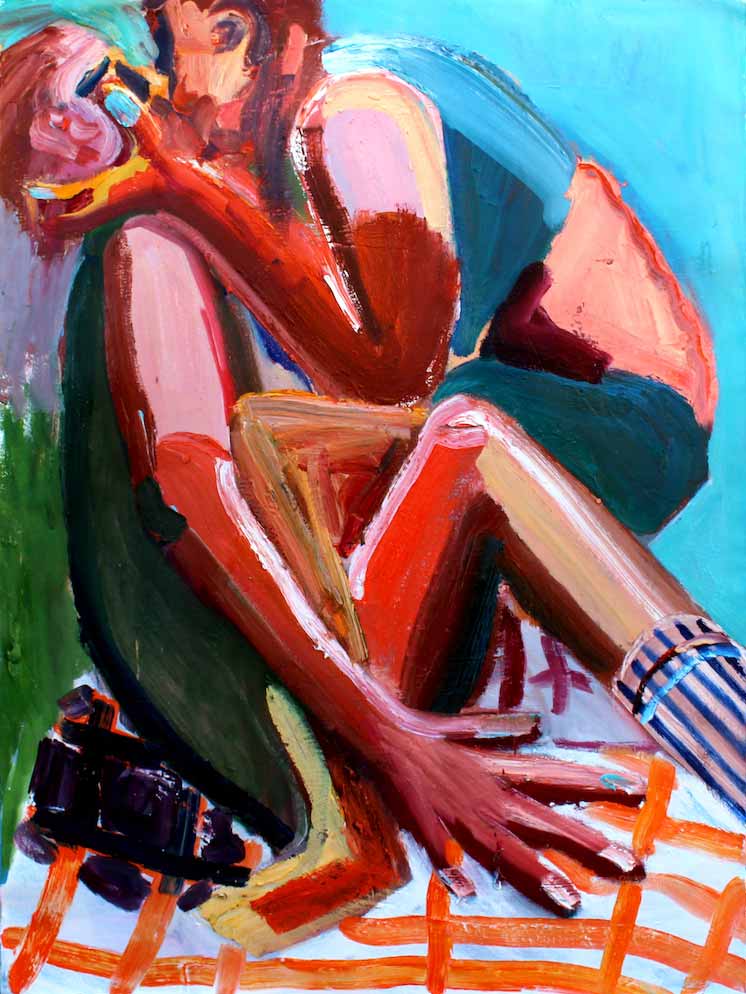 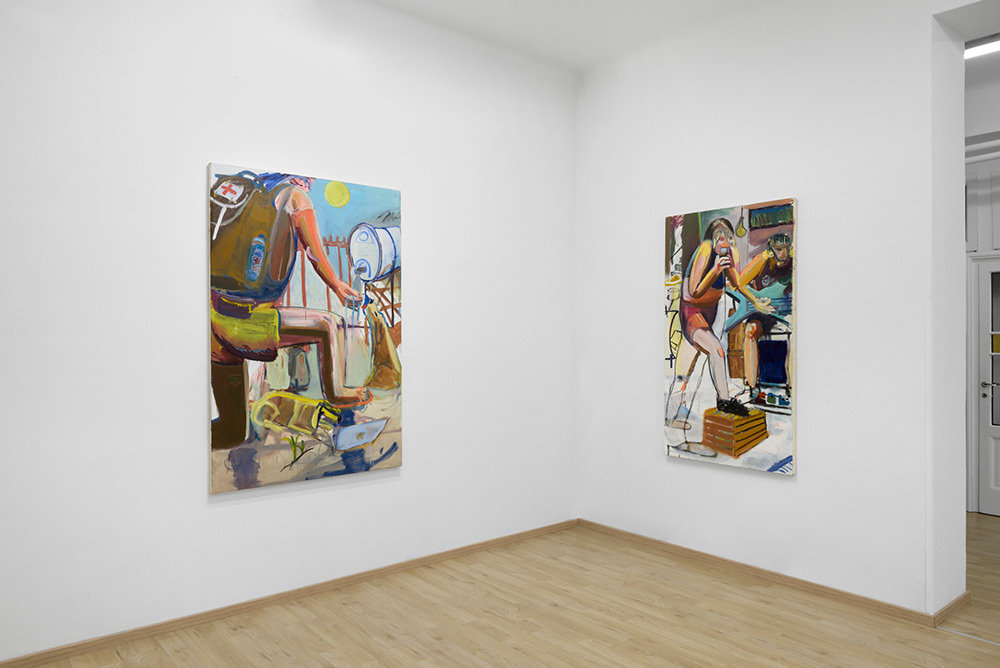 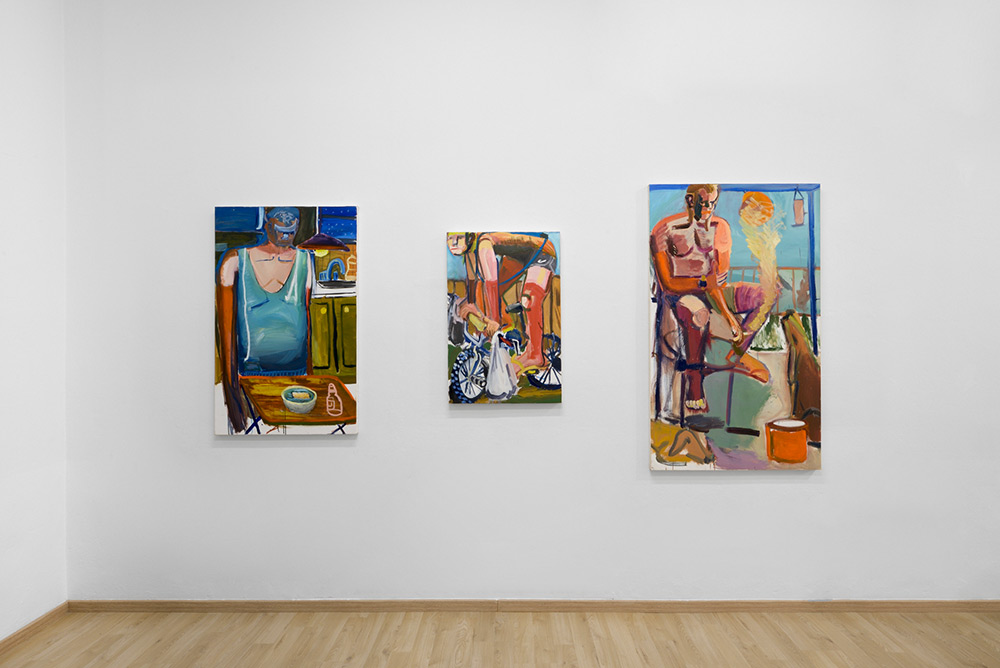 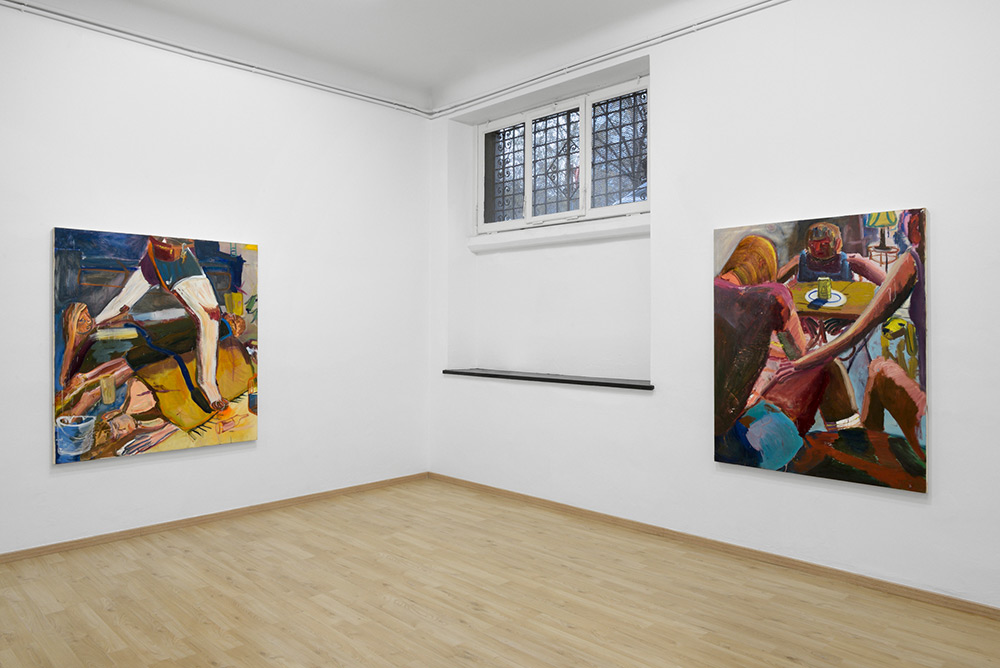 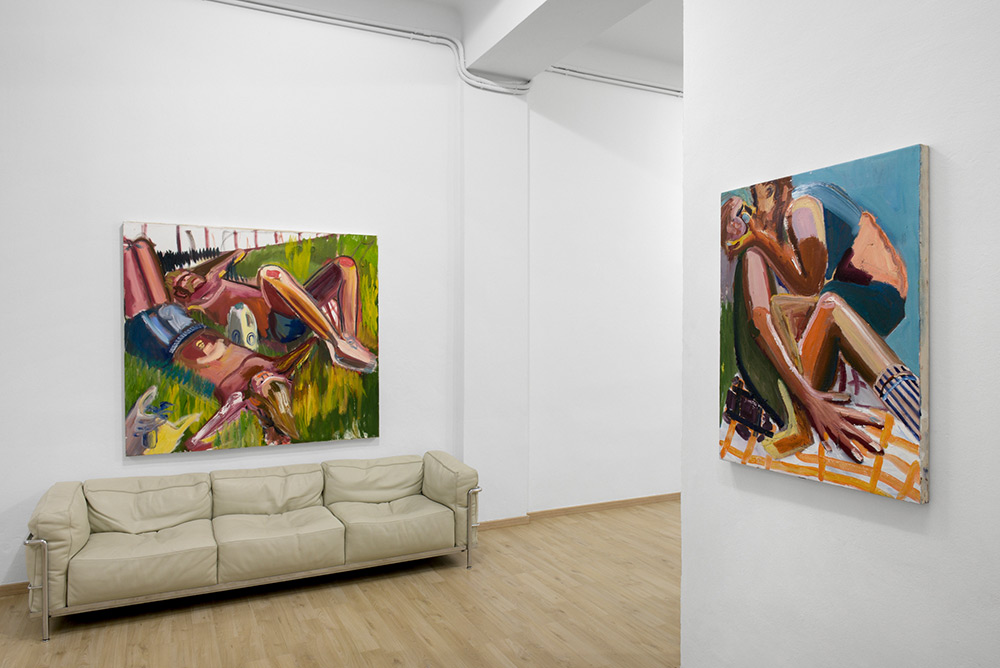 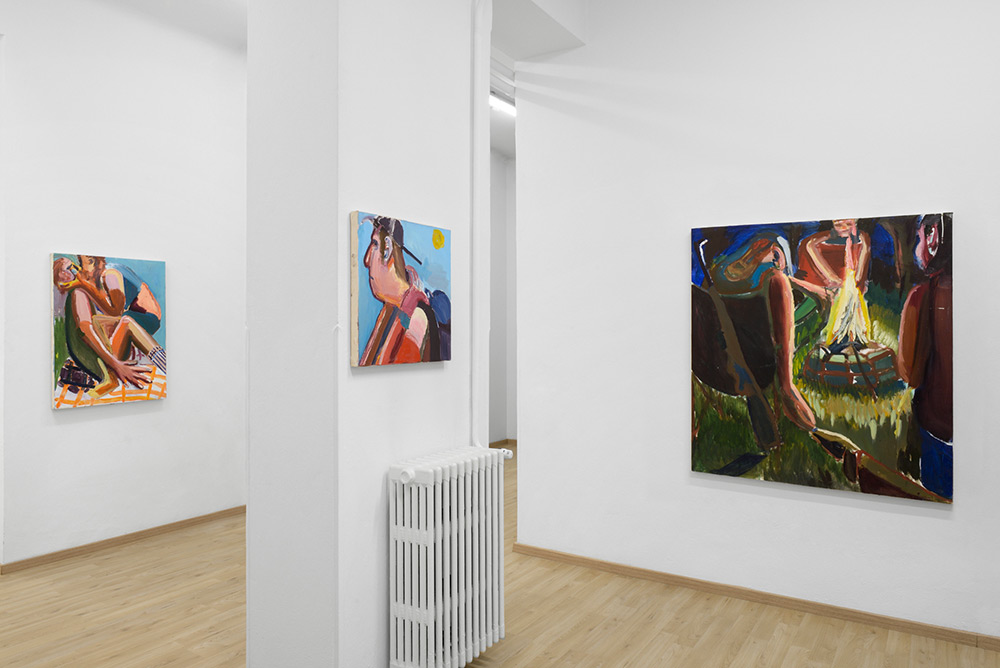 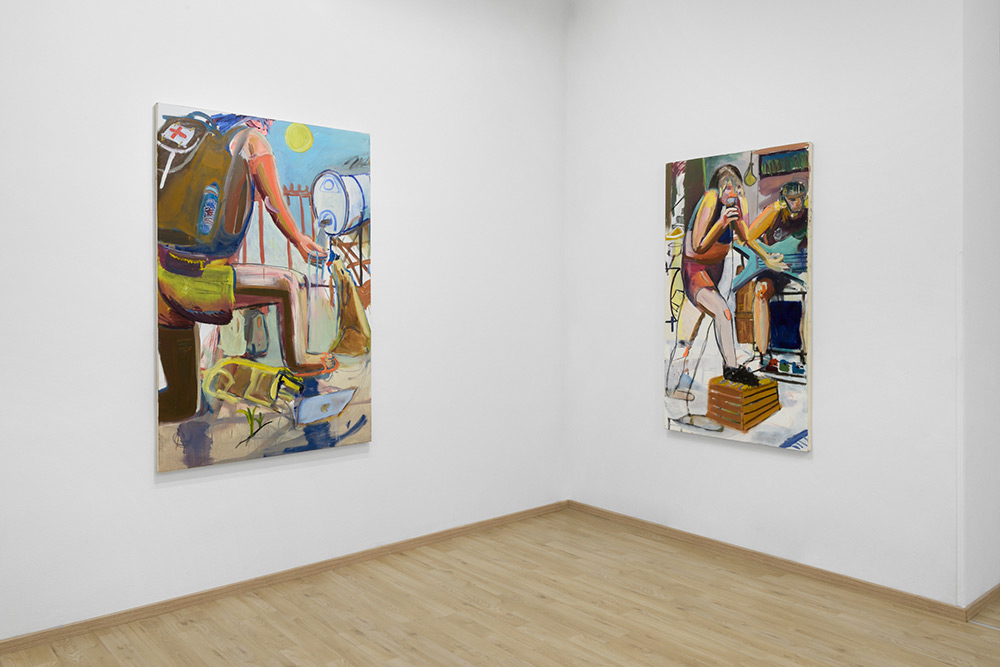 A.MORE gallery is happy to present the first exhibition of Jacob Patrick Brooks. The exhibition brings together a dozen of recent works on paper and canvas by the young American artist, whose practice is marked by a strong narrative tension and an ironic figuration, caustic and wild. The exhibition is accompanied by a text by Daniele Capra.

Suburban life in all its autobiographical, realistic and poetic facets, but also subtly political, is at the basis of Brooks’ research. His painting is in fact born from the visual stimuli he received from the unusual, funny and strange situations lived with friends, or that it is possible to observe in the community life of poor neighborhoods of the city where people commit to find jobs, to eat or to pass time.

In his canvases it rapidly happens to attend an improvised concert on the road, to spend the afternoon sunbathing in the garden, to see an improvised cyclist deliver a purse, to spend an evening with friends, while a hand laps a thigh, in a probable and completely unexpected invitation to pleasure.

The artist highlights – thanks to an anti-rhetorical and synthetic narrative and to a natural but sharp humor – the syncopated and bubbling rhythm of a humanity that lives instantly, seemingly without expectations, but which does not despair that a change may happen.

Brooks’ painting is characterized by an essential figurative style, sparse and at times primitive. His human subjects are delineated by a definitive trait, at times caricatural, reminiscent of that of cartoons, and characterized by an antinaturalistic color, in which thick, impetuous and frequently material brushstrokes overlap incessantly. The elements in his compositions are defined in a clear and decisive way, with various chromatic zones colliding, pushed to the maximum level of contrast.

Cold and warm colors, distant or conflicting colors are juxtaposed, without any regard, in an urticant and brutal way. There are no shades, half tones, spaces of relaxation or slowing down, because the color unfolds on the surface with a fiery and incessant metric scan, in which those who watch would like to participate. This style – passionate, wild and at the same time ironic – makes the small daily events narrated by the American artist so surprising and interesting. Spontaneously, but unexpected, Brooks puts the observer in touch with the subject represented, managing to approach him and make
him feel friendly involved.

Jacob Patrick Brooks (Kansas City, 1994) studied art at the Kansas State University and later at the New York Academy of Art. He lives and works in New York.